And at the end of eight days, when He was circumcised, He was called Jesus, the name given by the angel before He was conceived in the womb. Luke 2:21 ESV

The promised Saviour was called “Jesus”, like the angel said. It meant, quite aptly for the Messiah, “Yahweh saves”. It was also a common Jewish name, though, the one we know as “Joshua”. This hero of the Old Testament – called both Yehoshua and Yeshua in the Hebrew – is called Iesous in the Greek Bible, wich means Jesus. Yes, Jesus was named after Joshua, whom God also used to save His people.

Joshua must have been a great inspiration for Jesus! Joshua was a true hero – a soldier, a leader, a man of God. Remember, Joshua led his people through the Jordan. He met the Lord outside of Jericho before he vanquished the city. He took possession of the Promised Land. He brought the people into a new covenant with God. Joshua was great, but he was only a shadow of the Joshua-to-come. He was much greater: He saved the world; He led the world to God; He brought the world into a new covenant with God. Be like Joshua – but be even more like Jesus!

Heavenly Father, give me the strength, courage and victory of Joshua. Even more, Lord, give me the passion, love and selflessness of Jesus Christ, my Lord and King. In His Name we pray, amen. 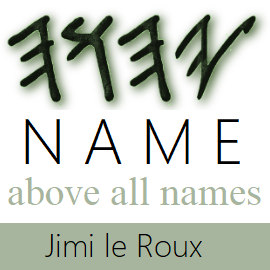